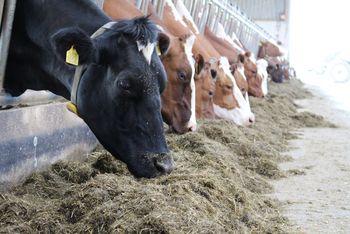 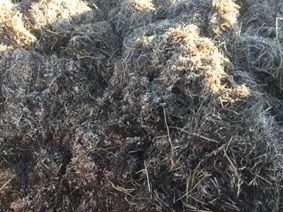 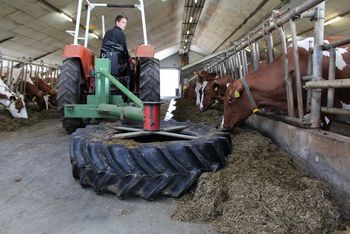 Every  farmer wants what is best for his animals: comfortable stables, good air quality, sufficient water, high quality feed and well blended rations. These are also dairy farmers  Bert and Robert Versteeg's top priorities. Bert operates dairy farm Versteeg in Bornerbroek (the Netherlands) together with his wife Anja and their  son Robert. The Dairy has 120 dairy cows and 60 heifers. Last year, Versteeg's feed consultant pointed out that feed sorting could be reduced further despite their already good yield of  27 kg of milk per cow per day. That observation was the start of a valuable process that offered new insights and new habits.

A well-known phenomenon at many dairy farms is that cows move their noses through the feed in order to try and extract the tastiest feed. This is not a desirable situation. Dairy farmers spend a lot of time and money determining the best rations and sorting behavior may leave the most important components lying by the feeding fence. This behavior can have many consequences: lower feed efficiency, ruminal acidosis, reduced dry matter intake and other health problems. So how can we stop cows from sorting their food at the feeding fence? The answer is simple: an optimum mix quality.

The feed consultant saw the selection behavior of Versteeg's cows and decided to investigate what could be done to limit sorting at the feeding fence. Bert Versteeg: "The feed looked well mixed to me, but the consultant was not satisfied. Apparently, the cows could still select too much."  The feed consultat then organized a visit by both Trioliet and Diamond V, a scientific institute for cattle feed and health, who then made joint recommendations on the correct use of the mixer feeder wagon to the Verteeg’s. One of the recommendations was a change in the loading order of the different feed ingredients.

The rations Bert Versteeg gives his cows consist of pressed pulp, two different concentrates, grass silage and maize. Versteeg drives his 10-year-old 18 m3 Solomix mixer feeder wagon along the concentrate silos and silage pits as part of his daily routine for loading. The order in which the various feed components were loaded was mainly determined by the logistic organization of the farmyard and habit. The concentrate silos are next to the shed where the mixer feeder wagon is stored. Versteeg logically started by loading the relatively fine concentrate and then drove from the shed towards the grass and maize pits. Water was added between the concentrate and the silage to make the components stick together. The assessment showed that the grass silage did not separate well and therefore did not mix properly when added to the rations as the final component. The grass silage separated too slowly and sometimes even spilling occurred. Thanks to some simple adjustments, the rations are now well-mixed and homogenous.

The loading order and other factors were changed to ensure homogenous mixing of the feed. Instead of loading the concentrate first, Bert Versteeg now starts by adding the grass. Versteeg: "I first load the grass silage and then add one third of the maize. I mix that for about 15 minutes and I then add water and concentrate." Loading the mixing tub with the textured grass and a little maize first makes it easier for the two augers to process the compact feed and for the auger knives to do their job. The finer concentrate components are not added until the grass has been cut and separated properly. Versteeg: "All the mixing takes about half an hour. The new loading order makes it a lot easier to mix the rations and also requires less tractor power."

What else do you need to bear in mind?

Not just the loading order is important. The auger knives were also considered. Both augers had five short knives . One short knife at the bottom of the auger has now been replaced by a long knife, which loosens the compacted grass for easier mixing. The use of the counter knives was not recommended for this ration. The counter knives are sometimes recommended to create back pressure in the mixing vessel to better cut the feed, but the benefits of counter knives are highly dependent on the type of roughage. It is advisable to use counter knives for long shapes, such as round bales, but they may have the opposite effect on relatively compact roughage types. In that case, they can obstruct  dual flow circulation in the mixing tub. The counter knife on the Versteeg Solomix had been activated from the start. This had never been assessed. It appeared that it is entirely unnecessary and not advisable for these rations.

With a few small adjustments, the Versteeg rations are now much more thouroughly mixed. The cows are showing less sorting behavior. Versteeg: "After three months, we can certainly say that the recommendations are having a positive effect on the selection behavior and production. There are some things you really need to pay attention to. The quality of the knives is very important, for example. Replacing them regularly can make a huge difference. We examined the rations with the particle separator before and after the adjustments and we concluded that there is now more textured feed in the middle sieve and far less concentrate in the lower tray. This proves that the feed is better mixed. The rations are now the same across the feeding fence's entire length.  I am also very happy that deactivating the counter knives has reduced spillage and horsepower! Evaluating  how you use the mixer feeder wagon on a regular basis is certainly worthwhile. It was a very valuable process for us. I would recommend it to anyone," Bert Versteeg concludes.