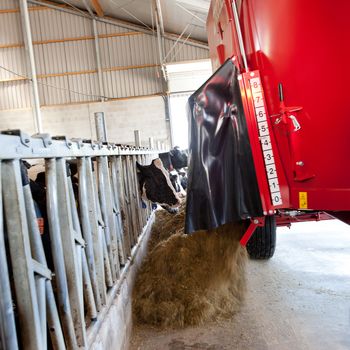 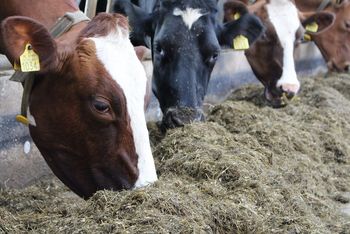 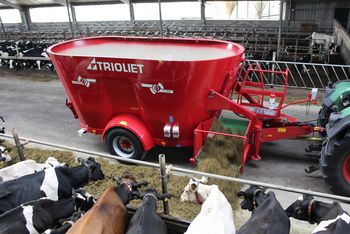 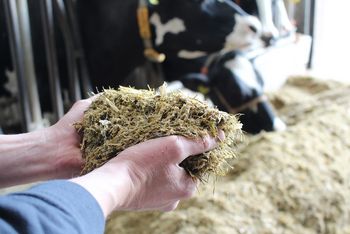 Dairy farmers are constantly looking for ways to prevent feed selection, improve animal health and increase production. Compact feeding seems to offer a solution in efforts to prevent selection. But what exactly is compact feeding, and how does it work in practice?

Compact feeding may seem just a question of adding water to the ration with the idea that 'it doesn't hurt to try'. But it's much more than just adding water. It is a form of TMR feeding (Total Mixed Ration) in which all cows in a production group have unlimited access, 24/7, to a ration that has been mixed so well that the cows cannot select (not even when the feed dries during the course of the day) and every bite therefore has the same composition. This is the definition according to Danish research agency SEGES, which introduced the term 'Compact TMR'. According to researcher Niels Bastiaan Kristensen, it is important to take a number of aspects into account for compact TMR feeding. The leftover feed must be analysed and loading and mixing must be done according to specific protocols. When mixing, particular attention must be paid to soaking the concentrate feed and to intensive mixing and cutting through longer mixing.

Mixing according to the Compact TMR principle

Mixing according to the 'compact feeding principle' takes place in three steps:

Dry ingredients are normally easy for cows to pick out of the ration, which leads to selection behaviour by cows. When you add enough water, the ingredients adhere to each other and are taken up along with the forage. The amount of water depends on the ration and the dry matter content (DM), but in many cases the following rule of thumb applies: the amount of water in litres corresponds to the weight of the concentrate components. For TMR feed, Kristensen recommends a DM content of 36-38% for a vertical TMR mixer and a higher DM content for a horizontal mixer to prevent water from being squeezed out of the mixture in the final stage.

Moist ingredients such as molasses, beet pulp and brewers' waste already have some moisture of their own and can replace some of the water. The aim is to turn the concentrates and any other by-products into a homogeneous mixture which adheres to the forage or is even absorbed by it. Most ingredients are well soaked after one hour, but with beet pulp, for example, soaking takes up to between eight and twelve hours. According to Kristensen, if you feed several times a day it is important to soak a larger amount of concentrate feed and use this for several feeds.

At this stage, the forage, with the exception of the silage maize, is loaded. This stage is intended for intensive mixing of the forage with the concentrate feed so that it adheres well to the forage.

The grass, which should preferably be chopped (0.8-1 cm), is mixed with the pre-mix at a high auger speed of at least thirty revolutions per minute. After the grass is loaded, a post-mixing time of fifteen to twenty minutes is applied.

It is important to keep the forage short so that it adheres better to the concentrate feed, which makes it more difficult for the cows to select. Moreover, it is important for good mixing that the particle length of the different components is almost equal. It is, of course, better if the forage is already chopped during ensilage, but with the mixer wagon the forage can be chopped further. It is important to place the knives in the right positions on the augers. With the Trioliet feed mixers, you can select different knife positions so that you always have the most optimal cutting action. The different positions will depend on the ration. This video explains when to use which positions. The auger knives must always be sharp, of course, so be sure to check them regularly. A sharp knife mixes better and saves on fuel and power because there is less resistance. Thanks to their unique shape, the patented Trioform auger knives stay sharp for longer. Take a look at the properties of Trioform knives here.

In the last stage, maize is loaded into the diet feeder. This makes the heavy, compact mix a little less dense. After the maize has been loaded, you need to mix it again for a further fifteen to twenty minutes. Kristensen prefers a higher auger speed of about thirty revolutions per minute. For Danish-type rations, he strongly advises not to switch off the mixer feeder between the middle and the final mix and during discharge. A planetary gearbox can offer a solution to reduce the power requirement, for example with the Shifttronic automatic planetary gearbox. Depending on the load, the two- or three-stage powershift automatically shifts up or down to the optimum auger speed. Not only does this spare the feed mixer's drive line and the tractor's PTO coupling, it also saves fuel and time. This is because the augers always rotate at the optimum speed, even with wet and heavy rations.

You can imagine that the heavy, compact mixture requires considerable power from the tractor and places physical demands on the mixer feeder. This is why you should not choose equipment that is built too lightly, but opt instead for quality. For example, Solomix X-Range mixer feeders are equipped with an extra-thick 10-mm wall and extra-thick, 22-mm-thick auger blades, which can be coated with a stainless steel liner for an extra-long service life. This is why Solomix mixer feeders are suitable for compact TMR.

Kristensen also emphasises that the feed must be properly propelled through the mixer tub during the mixing process. This movement is important for homogeneous mixing. Not mixing the ration properly can have far-reaching consequences for the cows. The Solomix mixer wagons have asymmetrical inserts, triangles between the augers, which ensure that the feed is propelled horizontally through the augers throughout the mixing tub. Thanks to the shape of the augers and the wide auger winding, the feed is also propelled upwards and falls down again through gravity. This horizontal and vertical movement, known as the Dual Flow mixing principle, produces a well-mixed, homogeneous ration.

Compact TMR feeding has been in use for about five years in Denmark, where there are proponents and opponents of this principle. The proponents are convinced of the advantages and use the Compact TMR protocol for all feeding. They see an increase in production and an improvement in the health of their livestock. Opponents claim that compact TMR feeding is too labour-intensive and uses too much fuel – to the extent that the costs outweigh the benefits. Some do adopt certain elements from the concept, such as making a pre-mix, using the right loading order, the right number of auger revolutions and adding water. In this way it can be integrated into their business operations and they may benefit from some of the advantages of compact feeding.

This is why a Trioliet Solomix is highly suitable for compact TMR:

It goes without saying that Solomix feed mixers are suitable for all types of rations and all types of feeds, including rations with long, textured components and round or square bales.