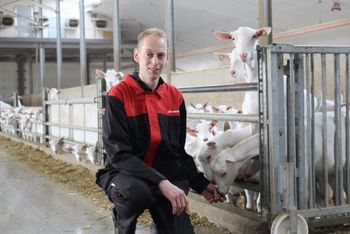 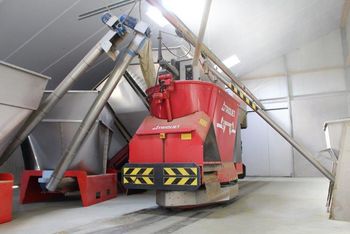 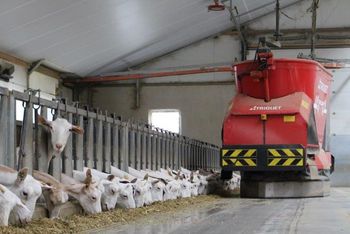 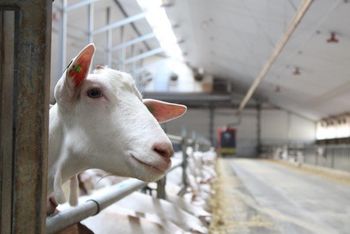 Bart Smolders is a goat farmer. With 1200 dairy goats and 400 breeding goats, his business, VOF GeBaGeitenhoeve in The Netherlands, is a medium-sized goat farm. Together with his wife Geertje, Bart Smolders runs the farm, which he took over from his parents six years ago. Smolders has a clear strategy for the business. Although growth is not currently possible, he decided a few years ago to adopt a future-oriented approach to business.

Goat's milk is hot stuff. The demand for goat's milk has only increased over the last few years. This trend can be seen not only in Europa, but also in Asia and the United States. People with a lactose intolerance are discovering in large numbers that goat's milk is better tolerated thanks to its lighter, more easily digestible proteins. Consequently, goat farms are thriving. But with only two people in the business, it was quite hard for Bart Smolders to keep up with the work. A few years ago, he decided to build a new stable and so faced the decision: automate or take on staff. He chose to automate.

For me, labour-saving is the greatest advantage

In 2015, Smolders arranged to have the new stable built and increased his stock from 800 to 1200 goats. His decision quickly fell in favour of an automated feeding system. Bart Smolders: “Feeding is a daily recurrent and labour-intensive occupation and with five groups of animals it was soon taking 2.5 hours a day. Following the expansion, I went from five to eight groups and then feeding started to take up too much of my time.”

The Triomatic robot is able to handle small mixes

For two years now, he has been operating a Triomatic T30 feed kitchen on the goat farm with four storage bunkers and a wheeled feeding robot. “The stable installation company advised us to use a Trioliet automated feeding system. I was also attracted to the wheeled robot, which had then just been introduced. I am happy that I didn't choose any other system, although I was initially interested in another make. No robot mixes as efficiently or as accurately with equal discharges as this one. Systems by other manufacturers can usually only effectively mix and discharge rations of 250 kg or more. The Triomatic robot is able to handle much smaller mixes. This automated feeding system is, therefore, in my opinion, actually much better suited to goats than to cows.”

The goats on the family farm are milked twice a day and the average annual yield is approximately 1300 litres per goat. The ration consists of maize, grass, alfalfa, beet pulp and five types of concentrate feed. Once a day, Bart Smolders fills the four feed bunkers and that keeps him busy for about half an hour. For him, labour-saving is also the greatest advantage. Smolders: “I was already someone who was accurate about feeding, even before we commissioned the automated feeding system. This means that the benefits in terms of yield and animal health are less significant to me. Anyone who makes the transition from feeding with one basic ration to accurately feeding in groups using a feeding robot will really see a big difference in results. For me, labour-saving is the greatest advantage, in particular. We can now run the business with 2 full-time employees, which is also quite important, of course.”

This is a GREEN product